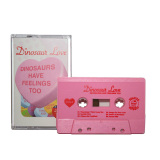 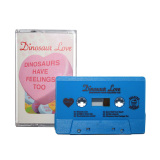 "Song titles will give you a hint at the direction here. “Godzilla Flick,” “I Wanna Be Fossilized,” “Dream Of Dinosaurs” and maybe the most revealing one, “Human Wife.”

This creation BC is the tiny brainchild of Peter Kulikowski, who apparently resides in a crater somewhere in the vicinity of Phoenix. These are simple songs but Mr. K. gets good mileage from the concept which extends beyond this release.

If you like unusual, prehistoric pop music, by all means get onboard with Dinosaur Love." - Cassette Gods

"Twee, lo-fi indie pop songs about romantic dinosaurs by Peter Kulikowski, who apparently has a dino-song cottage industry going. The songs are dreamy and catchy and remind me of early Beck. If you can deal with this much cuteness, then you’re gonna want to put one of these songs on a mix for your special someone." - Razorcake

01. Triceratops I Think I Love You

03. I Wanna Be Fossilized

04. Hungry For Your Love

12. Dinosaurs Have Feeling Too

VARIOUS ARTISTS "Comp For a Cause" 2xTAPE