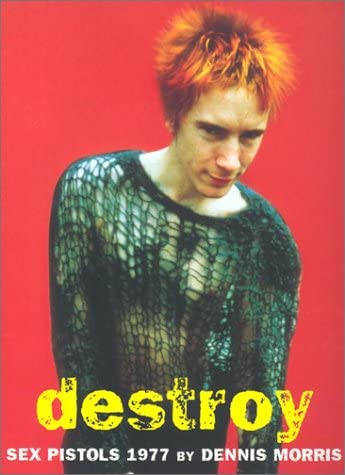 SYNOPSIS: "Punk rock-one of the most crucial and influential cultural movements of the 20th century-was epitomised by the Sex Pistols. And during the band's most formidable year, 1977, they had just one official photographer who documented and consequently defined this pivotal era-Dennis Morris.

Destory is a unique collection that has become a landmark work in music history. With unlimited access to the band, Morris documented their video shoots, the infamous Thames River boat-trip and their chaotic Swedish and UK Spots tours, right up to their departure for America in 1978-where it all fell apart.

Confrontational and anarchic live shots are interwoven with previously unglimpsed moments of the band; Johnny, Sid, Steve and Paul, backstage and off the road. The book also contains candid shots of band associates ranging from manager Malcolm McLaren to future PIL bassist Jah Wobble and the ill-fated Nancy Spungen

Documenting the originators of an iconoclastic period in youth culture, music and fashion in over 170 classic b/w photographs, Destory is the ultimate Sex Pistols photo book."