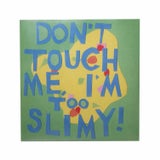 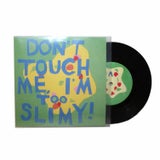 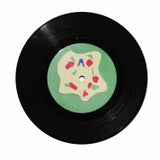 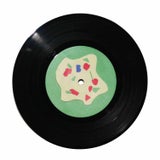 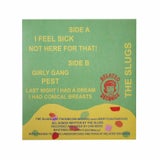 “The debut EP from the SLUGS, a shambolic UK duo putting a post-millennial spin on the whole post-riot grrrl, Slampt Records-adjacent sound of the mid-’90s. To that end, there’s a track titled “Girly Gang” on the B-side that’s essentially a sing-song, tongue-in-cheek response to tired “girl in a band” tropes, and which functions as a pretty representative glimpse into where these SLUGS are coming from. Each of the EP’s five songs follow a fairly simple formula of scrappy and jangling three-chords-or-less guitar backed by haltingly bashed-out drums, with both members singing/shouting together and over each other about mostly practical concerns (dealing with creeps, not wanting to be touched, generally being pissed off), but marked by a certain twee playfulness thanks to the sugar-sweet delivery.”-Maximum Rock N Roll

"Unexpected dose of merry DIY post-punk from The Slugs, who are probably what, the hundredth band to be called The Slugs? I dare you to finish listening to Don’t Touch Me, I’m Too Slimy! in a grumpy mood… these songs are such simple, merry fun that even the stinkiest curmudgeon in your group won’t be able to complain. Guitar, drums and vocals are The Slugs’ equation, about as simple as it gets, yet these songs really come alive with the same innate pizazz that made records by The Petticoats, Television Personalities and Thin Yoghurts the timeless delights that they are. “Not Here For That!” offers a catchy chorus that seems to have both members singing a chorus of, correct me if I’m wrong, “I’ll just eat my chips from the boat”. Little effort appears to have been put into the drum pattern and guitar riff of “Last Night I Had A Dream I Had Conical Breasts”, but that leaves plenty of open space for The Slugs to sing lines like “I got married in a dress by Vera Wang” and ensure they remain in your skull after the single stops spinning. I wanna say they sound English, but who knows, they could be from Akron or Mississauga for all I know. The Related Records’ Bandcamp page offers little info, which makes this release all the more intriguing and pleasurable. Fans of the lighter side of the Messthetics comps need to jump on this one ASAP!" - Yellow Green Red

FREAKS OF NATURE "want me! b/w now you say we're through" 7" VINYL