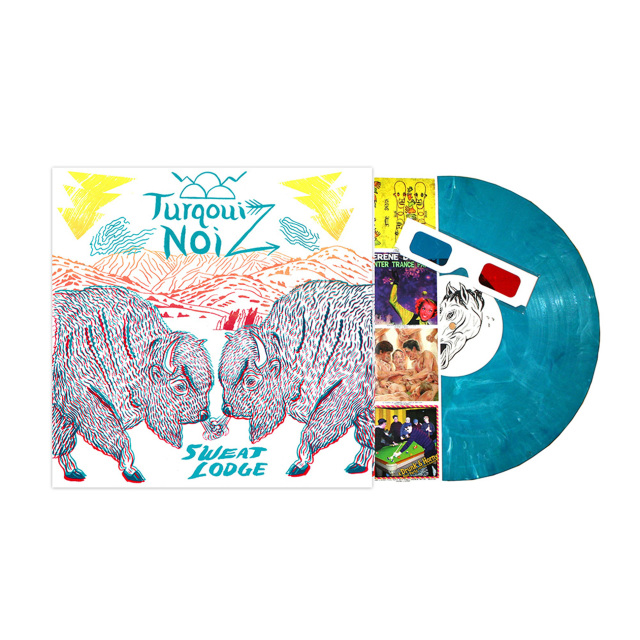 "I chose to review this sucker before I even had a chance to test it out. Thank God. Clearly I nabbed the “B” side of the record first, as the track “Aware” was the first thing to slip through the speakers in my direction from the vibrant turquoise vinyl. “Aware” hits at a fast clip, not wasting any time getting to the punchline. Its instrumentals operate mainly staccato chords, imploring its listeners “I’m aware” repeatedly, though keeping the “of what” quite vague. “Glad I laughed” spirals along with more of a spaceship vibe to it, while “Windows” has more of a devious flare to it, with guitar chords that could rip into your soul they’re so raw. Lyrics like “let’s tell the morning light it’s never ever too bright” also make it the most positive track on this side of the album, but we’re interested in hearing more. The last track on the “B” side is a track called “Braid”, which I find to be incredibly gorgeous in its simplicity. It begins as though it’s a love song, then turns into nostalgia while it slowly leads us out of this collection of music. But I’m not done, because we’ve still got side “A” to explore. “Green Hair” has a similar sound to “Aware” instrumentally, but it’s got an incredibly uplifting message in words like “everything’s alright right now everything’s all good now I got faith in all of us.” Apparently they fell in love with San Francisco, and perhaps the green hair was a part of that love story? “Until We Die” – although we can’t say much of the morbid title – is actually our favorite composition on the album, weaving its way into “Nursery Rhyme” which starts out as such, but goes through ebbs and flows of insane energy as well. “Choices” probably has the best potential to be a radio hit, while its subject matter implores its listeners that, essentially, if they’ve fucked up in life at all, “it’s too late.” Heartwarming. And if you’re looking for a heartwarming track, “Stoner” is definitely where it’s at. It’s a track about partying and doing what you want, and I’m 100% on board with that. Turqouiz Noiz isn’t lying with their name. But it’s a safe choice if you’re looking for an entire album you can jam to. Case closed." - Impose Magazine