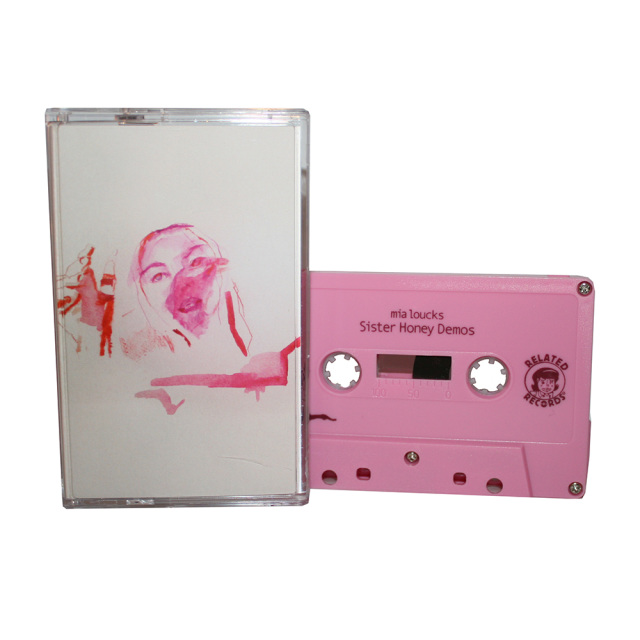 " I can certainly appreciate an artist that doesn’t hire a publicist and register their fancy Squarespace site before their first show, but music is enough of an outsider’s game at this point that it means less now than a couple decades ago. Anyway, getting back to Loucks, she plays acoustic guitar and sings, performing in a decidedly hushed and cozy style. Her songs, however, aren’t the sort of casual-strummed indie-folk you might anticipate, so much as down-picked, repetitive tunes that recall The Damned or Ramones more than Elliot Smith or Cat Power – they just happened to be performed by a woman on her acoustic guitar with little other accompaniment. “Demos” in the title seems to hint that these aren’t meant to be finished products, and that makes sense, seeing how full-band-ready they are, although on their own it’s a pleasant listen too." - Yellow Green Red

"Mia Loucks brings brutal honesty to a gritty, scruffy blues template that reminds me of Aisler’s Set’s Amy Linton and early OCS. Sister Honey Demos revels in Velvet Underground riffs and angelic vibes, all the while ripping your face off with sensitive, mature subject matter that calls out the double-standards you and I, for the most part, take for granted. I don’t want to spoil the lyrics for you, it’s just not my usual way, but the grim (depending on how you view them) realities of life as a female, if I’m not mistaken, seem to be a sticking point for Loucks. When it comes to relationships, she (seemingly) grows attached, maybe too quickly, all the while exhibiting an attitude that flicks a lit cigarette into the eye of those who may wish to silence her right to sing about it, warts and all. Huge, hairy warts. Shit-stained balls. Torn leggings. It all ends up in the dustbin of time and space, so maybe we make too much of it, but lord does it hurt to Be. And that’s, of course, part of the beauty of it, and music created by the sad and lonely feeds into the continuum of that. A girl strumming and singing isn’t rocket science, yet thousands of ladies and gents alike try to do it as well as this gal and come up so much shorter it’s not even fair. It shouldn’t sound this easy, this detached without any iota of disconnect, this… urgently important. Pretty sick, pretty genius, pretty unprecedented, to the point of Loucks being a lock to explode like a supernova if she grows as powerful as Sister Honey Demos suggests she could. The material, attitude, and tough-to-pin-down edge are THERE, it’s just a matter of a few waves breaking the right way. You know how it is, patna. We should all be famous together, really, but some of us just seem destined to glow. I’m vouching for Loucks, suffice to say, and NOT just because she talks about friends that show their titties (though the bare honesty throughout is part of the charm)." - Tiny Mix Tapes

THIS ALBUM CAN BE DOWNLOADED ON OUR BANDCAMP PAGE!