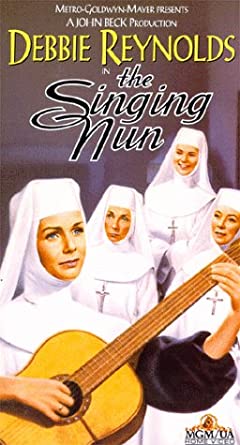 SYNOPSIS: Sister Ann (Debbie Reynolds) leaves the Dominican convent near Antwerp for her assignment at Samaritan House in a depressed area of Brussels. Sister Ann loves to play the guitar and sing, and when she joins in the traditional evening singalong at Samaritan House, she impresses the other nuns and Father Clementi (Ricardo Montalbán). She becomes fond of Dominic Arlien (Ricky Cordell), a motherless child whose father is an unemployed drunkard and who is loved only by his 17-year-old sister, Nicole (Katharine Ross). Sister Ann composes the song Dominique for the boy. Father Clementi persuades Robert Gerarde (Chad Everett), a partner in a recording firm, to listen to Sister Ann's music in the hope of having it recorded. When Robert meets Sister Ann, he discovers that she was his classmate at the Paris Conservatory of Music five years earlier. Later, while visiting the Arlien house, Sister Ann discovers pictures of Nicole in provocative poses; the girl defiantly tells the nun that she posed to get food and rent money for her family. Her father overhears them, strikes Nicole, and throws the nun out of the house. The Mother Prioress (Greer Garson) later admonishes Sister Ann for allowing the young girl's secret to be made known to the father. Robert, whose attraction to Sister Ann has been rekindled, obtains permission from church authorities to have her record an album; "Dominique" becomes a worldwide hit. Ed Sullivan brings a television crew to Brussels to film Sister Ann for his show; he gives the order a jeep for their African mission as compensation. Sister Ann becomes confused by her success and by Robert's personal interest in her, and she seeks counsel from Father Clementi. Her decision is made for her when Dominic is seriously injured in an accident; she prays for him, promising to give up her music and care for others if he recovers. The boy recovers, and the Arlien family, shaken by the incident, decide to move to the country. Sister Ann gives Nicole her guitar and goes to Africa to work among the natives, driving from village to village in a jeep with the name “Dominique” blazoned across its tailgate.