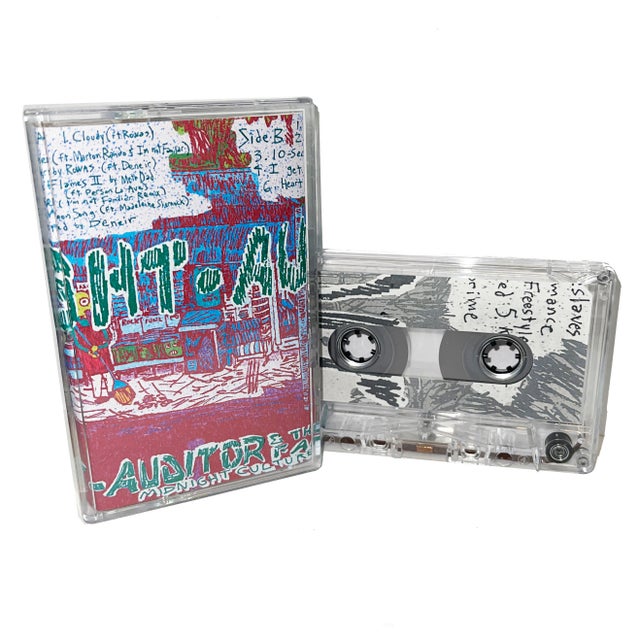 Parked beneath the watchful glow of a ketchup-red Arby's sign, you spy on your friend through a transparent window as he asks the Circle K manager for a restroom key and a roll of powdered Donettes that resembles a white, shrink-wrapped caterpillar in his closed fist. The headlights of station wagons huddling up to gas pumps fill the mid-October night with a warmth more imagined than felt. Each parked car is an astronaut tethered to its rectangular craft by a black, rubber rope, floating in a weft of crisscrossing beams that span the visible spectrum of light. Midnight Cultures rattles the passenger seat you've tilted back with the recliner handle.

Night Auditor is the experimental pop project of California's Hilal Omar Al Jamal, his 4th release and first full-length project Midnight Cultures taking the form of a genre-bending mixtape that's as grime-caked as it is gaudy. Its A-side is a woozy, undulating mass of viscous funk, tinged with fluttering improvisations and the screwball sort of lo-fi potpourri produced by Kerchow Records labelmates. Night Auditor slaps a watery, fuzzed-out filter on Of Montreal's bookish brand of post-RnB, traps it in a subtle, shadowy border of Memphis horrorcore production on "Bebe" and "Wonder", then highlights the soundscapes with optimistic twee-pop vibes on an atmospheric cover of Karen O's "The Moon Song"

Your gaze traces the sinister pen scratches etched across the face of the bathroom stall. Webs of exposed hardwood peek from the blue paint, their angles and splinters as sharp as the blinding light of an artificial bulb from above. It claws against sleepy eyes that struggle to stay opened. A JanSport slumps against your left calf, the unwrapped pack of powdered sugar pastried jutting from its front pocket.

Midnight Cultures' B-Side assumes an anthemic aesthetic that recalls the blog-rock of the late-aughts while still holding firm to the mixtape's off-kilter beatcraft. Opening track "Lovelslaves" funnels distorted Dinosaur Jr. riffage through the bouyant maximalism of Arcade Fire circa Reflektor. "I Get Lifted" evokes a more dissonant incarnation of Prince, threading twisty-straw melodies around meaty chunks of raspy rhythm. "Need That Dough" and "Heart of Grime" close the set with a one-two punch of skeletal jazz pop.

Midnight Culture is an innovative and ambitious effort that's just as easy to appreciate in an ambient sense as it is to lose one's self in deconstructing and understanding. Fans of Lil Ugly Mane, Prince and Madlib alike will find Night Auditor's strange concoction fascinating and/or satisfying."